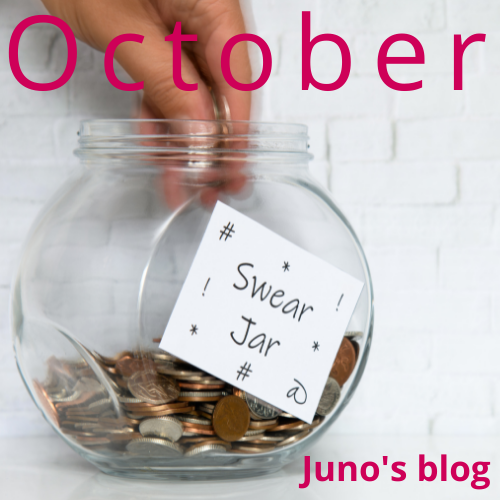 There’s an irritating little question that keeps popping up via Facebook when I find myself cruising for new cute puppy videos on The Dodo channel.

The question asks ‘what is the word or phrase that you find most irritating?’

For me it is probably ‘what is the word or phrase that you find most irritating’ but then I’m grumpy like that.

But it did get me thinking (that’s the thing I do in between cruising for cute puppy videos on The Dodo).

(N.B. other cute puppy video channels are available. Probably. Casper. Kobe the Golden. Jade and Jasper. Poppy and the Wolf Pack. I believe.)

Anyways – back to topic.

Split infinitives are worse – how to comprehensively ruin a sentence. (See what I did there??).

No – my biggest bug bear is swearing.

Ever since I was 11 and my friend Lisa spent an entire day at the Gosport outdoor swimming baths trying to get me to say the ‘f’ word I have known that this was going to be a feature in my life.

It’s not that I absolutely never swear.

It’s just that I save it for when the occasion really warrants a good old-fashioned expletive.

And that is rarely in front of other people.

Other than on those special occasions, I find the rest of our language is perfectly well able to convey the force of my opinion, shock or view. To just fall back on swearing is plain lazy.

And actually, when you really want that withering put-down or the comment that shows how utterly disappointed you are, nothing is more powerful than NOT swearing.

I’ve found it’s a bit insidious – the not swearing thing.

Where-ever I have worked, for some reason, swearing has been relatively commonplace in the beginning.

I have never asked anyone not to swear in my presence. I have never even thrown one of ‘those’ looks.

I have occasionally once or twice had a quiet word outside the room if it has been particularly bad but that’s all.

But over time the workplace has subtly changed and swearing disappears.

I do not think for one moment that it goes entirely, but it goes in my hearing and that is an indicator that it is likely to be at least reducing everywhere else.

I reckon it takes about a year with each new job for me to be able to say that I never hear anyone else at work swear – but it always happens, eventually.

And what that does is stops the habit forming, it arrests that instinctive response and this will mean it is far less likely that we will inadvertently drop a word-bomb in front of the children and young people that we care for.

The same goes for showing respect and listening. Being compassionate and putting others first.

Back to The Dodo.